Evolution of sexual mimicry in the orchid subtribe orchidinae: the role of preadaptations in the attraction of male bees as pollinators

Within the astonishing diversity of orchid pollination systems, sexual deception is one of the most stunning. An example is the genus Ophrys, where plants attract male bees as pollinators by mimicking female mating signals. Unsaturated hydrocarbons (alkenes) are often the key signal for this chemical mimicry. Here we investigate the evolution of these key compounds within Orchidinae by mapping their production in flowers of selected species onto their estimated phylogeny.

We found that alkenes, at least in trace amounts, were present in 18 of 20 investigated species together representing 10 genera. Thus, the reconstruction of ancestral state for alkene-production showed that this is a primitive character state in Ophrys, and can be interpreted as a preadaptation for the evolution of sexual deception. Four of the investigated species, namely Ophrys sphegodes, Serapias lingua, S. cordigera, and Anacamptis papilionacea, that are pollinated primarily by male bees, produced significantly larger amounts and a greater number of different alkenes than the species pollinated either primarily by female bees or other insects.

We suggest that high amounts of alkenes evolved for the attraction of primarily male bees as pollinators by sensory exploitation, and discuss possible driving forces for the evolution of pollination by male bees. 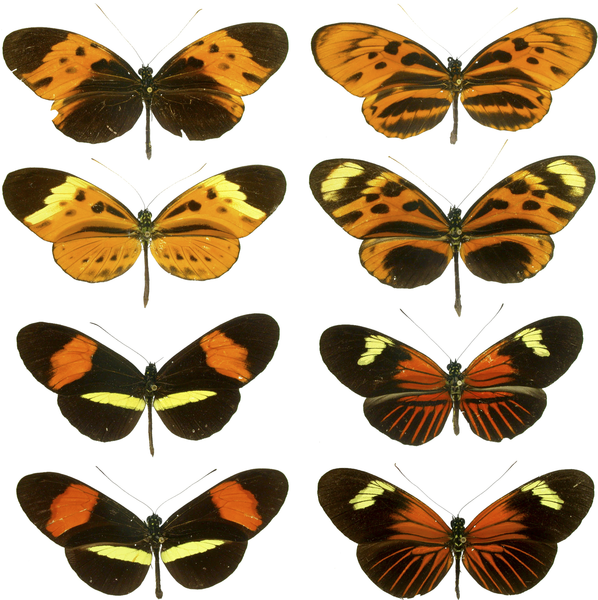 Interspecific sexual attraction because of convergence in warning colouration: is there a conflict between natural and sexual selection in mimetic species?

When species converge in their colour patterns because of mimicry, and those patterns are also used in mate recognition, there is a probability of conflicting selection pressures. Closely related species that mimic one another are particularly likely to face such confusion because of similarities in their courtship behaviour and ecology. We conducted experiments in greenhouse conditions to study interspecific attraction between two mimetic butterfly species, Heliconius erato and Heliconius melpomene. Both species spent considerable time approaching and courting females of the co-mimic species. Experiments using wing models demonstrated the importance of colour pattern in this interspecific attraction. Although males of H. melpomene were attracted to their co-mimics as much as to their own females, H. erato males were more efficient at distinguishing conspecifics, possibly using wing odours. Although preliminary, these results suggest that the use of additional cues may have evolved in H. erato to reduce the cost of convergence in visual signals with H. melpomene. Overall, our results showed that there might be a cost of mimetic convergence because of a reduction in the efficiency of species recognition. Such cost may contribute to explain the apparently stable diversity in Müllerian mimetic patterns in many tropical butterfly assemblages.
張貼者： 版主 於 上午3:19 沒有留言: