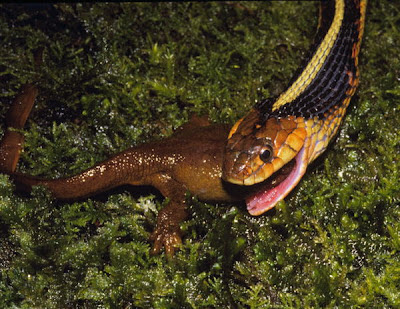 Arguably cute and spanning at most 20 cm from head to tail, the rough-skinned newt packs pretty near the most poisonous punch known to the animal kingdom. Taricha granulosa, like all species in its genus, exudes an exceptionally potent neurotoxin, tetrodotoxin (TTX) from its skin glands. Some Taricha newts could wipe out thousands of mice or a clutch of humans with their toxic issue. But why produce enough poison to kill a potential predator several times over? To discourage the one predator—the common garter snake (Thamnophis sirtalis)—that's resistant enough to the poison to count on newts as a food source.

Because coevolution takes place across a broad scale of time and space, it is virtually impossible to understand its dynamics and trajectories by studying a single pair of interacting populations at one time. Comparing populations across a range of an interaction, especially for long-lived species, can provide insight into these features of coevolution by sampling across a diverse set of conditions and histories. We used measures of prey traits (tetrodotoxin toxicity in newts) and predator traits (tetrodotoxin resistance of snakes) to assess the degree of phenotypic mismatch across the range of their coevolutionary interaction. Geographic patterns of phenotypic exaggeration were similar in prey and predators, with most phenotypically elevated localities occurring along the central Oregon coast and central California. Contrary to expectations, however, these areas of elevated traits did not coincide with the most intense coevolutionary selection. Measures of functional trait mismatch revealed that over one-third of sampled localities were so mismatched that reciprocal selection could not occur given current trait distributions. Estimates of current locality-specific interaction selection gradients confirmed this interpretation. In every case of mismatch, predators were “ahead” of prey in the arms race; the converse escape of prey was never observed. The emergent pattern suggests a dynamic in which interacting species experience reciprocal selection that drives arms-race escalation of both prey and predator phenotypes at a subset of localities across the interaction. This coadaptation proceeds until the evolution of extreme phenotypes by predators, through genes of large effect, allows snakes to, at least temporarily, escape the arms race.

Primarily directed towards answering a basic, but still poorly understood riddle: how do new species arise? His group focuses on evolution and ecology of butterflies and moths (Lepidoptera), particularly near the species boundary. The Lepidoptera form 15-20% of the world's described species, yet are poorly known genetically.

(1) Hybridization and evolution in Heliconius butterflies
(2) Taxonomy, mimicry and biogeography in the Ithomiinae

Although his primary interests are in genetic and systematic studies of populations, geographic forms, and speciation, many of his results have obvious implications for conservation of endangered taxa. He remains committed to and interested in topics such as insecticide resistance, safety concerns about the release of genetically modified organisms (GMOs), and in the biodiversity and conservation applications of his work. 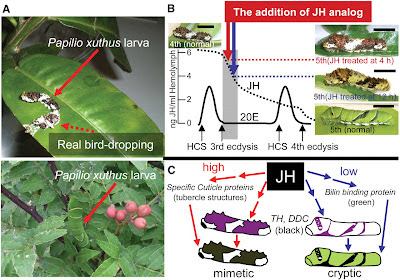 Insect color patterns can be very diverse. This variation is also seen among many larval instar stages, which can take on vastly different phenotypes. Young caterpillars of the swallowtail butterfly, Papilio xuthus, are mimics of bird droppings, whereas the fifth larval instar is camouflaged among the leaves of host plants (cryptic pattern). We find that juvenile hormone (JH) titers decrease during the fourth larval instar. Furthermore, treatment with JH analog at the beginning of the fourth instar stage resulted in reproducing the mimetic pattern instead of the usual cryptic one and likewise altered gene expression patterns to that associated with the mimetic pattern. These findings suggest that JH regulates the progressive larval pattern switch of this insect.

link: http://tinyurl.com/2m6zlz
Ihalainen, E. et al. 2008. Behav. Ecol. 19: 362-368
Abstract: Field experiments have shown that avian predators in the wild can select for similarity of warning signals in aposematic prey (Müllerian mimicry) because a common signal is better protected than a signal that is novel and rare. The original theory of Müllerian mimicry assumes that the mechanism promoting mimicry is predator learning; by sharing a signal, the comimic species share the mortality that is due to sampling by inexperienced predators. Predation events have not been observed in the wild, and learning experiments with naive bird predators in a laboratory have not unambiguously shown a benefit of a uniform signal compared with different signals. As predators in the field experiments are likely to be more experienced compared with previous laboratory experiments, we studied selection by experienced predators on a novel imperfect mimic. We trained great tits Parus major to avoid artificial aposematic models and subsequently introduced perfect and imperfect mimics at different frequencies. Birds with prior experience on the models selected against the imperfect mimics that were at a disadvantage also in a memory test conducted a week after their introduction. Selection against the imperfect mimics was antiapostatic. However, the imperfect mimics also benefited from some signal generalization to the models and possibly gained protection because the birds were familiar with the alternative cryptic prey that was also present. Our results suggest that experienced predators might be more important to the evolution of mimicry than the learning-based theory assumes.
張貼者： Chia-Hsuan Wei 於 上午10:59 沒有留言: 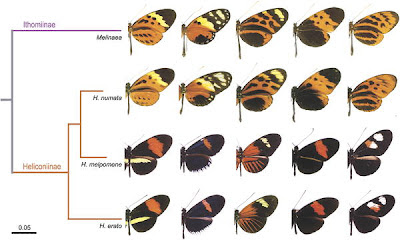 Link: http://0rz.tw/733NG
Abstract: We studied whether similar developmental genetic mechanisms are involved in both convergent and divergent evolution. Mimetic insects are known for their diversity of patterns as well as their remarkable evolutionary convergence, and they have played an important role in controversies over the respective roles of selection and constraints in adaptive evolution. Here we contrast three butterfly species, all classic examples of Müllerian mimicry. We used a genetic linkage map to show that a locus, Yb, which controls the presence of a yellow band in geographic races of Heliconius melpomene, maps precisely to the same location as the locus Cr, which has very similar phenotypic effects in its co-mimic H. erato. Furthermore, the same genomic location acts as a “supergene”, determining multiple sympatric morphs in a third species, H. numata. H. numata is a species with a very different phenotypic appearance, whose many forms mimic different unrelated ithomiine butterflies in the genus Melinaea. Other unlinked colour pattern loci map to a homologous linkage group in the co-mimics H. melpomene and H. erato, but they are not involved in mimetic polymorphism in H. numata. Hence, a single region from the multilocus colour pattern architecture of H. melpomene and H. erato appears to have gained control of the entire wing-pattern variability in H. numata, presumably as a result of selection for mimetic “supergene” polymorphism without intermediates. Although we cannot at this stage confirm the homology of the loci segregating in the three species, our results imply that a conserved yet relatively unconstrained mechanism underlying pattern switching can affect mimicry in radically different ways. We also show that adaptive evolution, both convergent and diversifying, can occur by the repeated involvement of the same genomic regions.
張貼者： 版主 於 下午1:29 沒有留言:

Link: http://0rz.tw/633Np
Abstract: Many palatable animals, for example hoverflies, deter predators by mimicking well-defended insects such as wasps. However, for human observers, these flies often seem to be little better than caricatures of wasps—their visual appearance and behaviour are easily distinguishable from those which they are attempting to mimic. This imperfect mimicry baffles evolutionary biologists, because one might expect natural selection to do a more thorough job. Here we discuss two types of cognitive processes that might explain why distinguishable mimics could enjoy increased protection from predation. Speed–accuracy tradeoffs in predator decision making might give imperfect mimics sufficient time to escape, and predators under time constraint might avoid time-consuming discriminations between well-defended models and inaccurate edible mimics and instead adopt a “safety first” policy of avoiding insects with similar appearance. Categorisation of prey types by predators could mean that wholly dissimilar mimics may be protected, provided they share some common property with noxious prey. If predators use experience with multiple prey types to learn rules rather than just memorising the appearance of individual prey types, it follows that different individual predators should form different categories, each including separate types of novel prey. Experimental studies to test these hypotheses should be straightforward, because we can use the relatively simple signals (e.g., striped patterns) with which prey manipulate predator behaviour as tools for investigating cognitive processes that underlie decision making and object recognition in animals' daily lives.
張貼者： 版主 於 上午11:51 沒有留言: